One of the ARCs I most coveted at ALA Midwinter in Chicago was the latest installment of Jeanne Birdsall’s insta-classic Penderwicks series, so there was a lot of internal–okay, and maybe a little external–squealing when I managed to snag a copy at the Random House booth. This is the first Penderwicks book I’ve actually “read.” I listened to the rest of the series on audiobook, 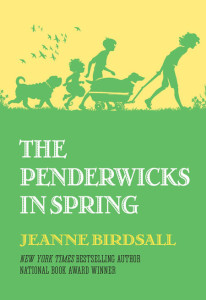 which means that my husband has been forced to listen to bits of the Penderwicks and also that we can do funny voices for “Batty.”

The Penderwicks in Spring is just as darling a book as the previous three Penderwicks books. Birdsall has such a knack for making the smaller, ordinary moment so deeply felt, and that was as true in this book as it was in the others, whether it’s Batty’s anxiety over asking her music teacher if she’d consider offering private singing lessons for her, or Ben playing action figures. The emotional center of this novel is Batty, now eleven, who is still struggling with the death of Hound. Everyone else has moved past their mourning, except Batty, who blames herself for Hound’s death. As always with the Penderwicks, there’s a flurry of activity with there being so many Penderwicks. Two-year-old Lydia is always getting into something, Skye and Rosalind have boy issues, and Nick Geiger is soon coming home from war. I so enjoyed watching Batty move past her grief and also learn to enjoy this unexpected gift: her beautiful singing voice. Birdsall has one more Penderwicks book planned, but honestly, I hope she reconsiders and keeps on writing them as long as she has more stories to tell. The Penderwicks are right up there with the Bravermans and the Gilmores as fictional families I’d love to be adopted into.