As a child, the books that kept drawing me back were the ones in which a beloved character dies–Lois Lowry’s A Summer to Die, Sharon Creech’s Walk Two Moons, and countless others. I’m not entirely certain why I was drawn to these titles, as the juvenile me had, thankfully, very few direct encounters with death. And yet, I can so clearly remember visiting my school library and sneaking its copy of A Summer to Die off the shelf and reading just a bit, every time our class visited the library. Adult-me is still drawn to tearjerkers, though a bit more out in the open. I’ll never forget reading the entirety of The Fault in Our Stars in an airplane window seat, openly sobbing at the end. Or sniffling my way through Jo Knowles’s See You At Harry’s. You could say I’m a timeless fan of the tearjerker.

So I guess it’s not entirely surprising that as a writer, I’m drawn to certain themes, topics, and plot-lines that get the tears flowing in readers. (And okay, the writer too. No tears in the writer, no tears in the reader, right?) That said, it’s always a challenge every time I’m writing these sad scenes and moments. Am I evoking that emotion for the reader, or just me? I find myself wondering. It’s hard to tell until I share my work with other readers.

A week ago today, I said goodbye to the closest thing I had to a childhood pet: my parents’ cat Suki, acquired while I was away at college. In the days between the goodbye and the last trip to the vet, I was surprised by how completely overcome I was by grief. In the past few years, my family had been hit hard–I lost all three of my grandparents in a six month span–but I’d never experienced the death of an animal. Yet, in some ways, I felt like I had. My middle grade work-in-progress included a plot thread in which the main character’s beloved dog disappears right before a tornado and is assumed dead. I tried, as best as I could, to assume her mindset as I wrote and revised (and revised, and revised, and continued to revise), but it was only as I grieved the death of Suki that I discovered how much I got wrong, how much I underestimated the depth of grief that can come with a death of a pet. With that in mind, next week, I’m gearing up for another round of revisions starting next week, looking for ways to deepen my character’s experience, now that I’ve gone through it myself.

A brief memory of Suki, as previously posted on Facebook:

If it weren’t for Jessi, I’m sure my parents never would have had a cat. My mom didn’t want to get “attached,” she said, which explained why as kids we had pets with very short life cycles: fish, a bunny, gerbils, etc. But when my brother’s then-girlfriend needed to find a home for a cat they’d taken in that wasn’t meshing with their other cats, somehow my mom offered up to take her in. She so generously offered Suki (my brother’s name for the cat) the garage, the porch, and the basement, fearful that the cat would terrorize and destroy her house. Little did she know Suki’s true nature.

From a thousand miles away at college in Chicago, I followed the saga as Suki was slowly let into more and 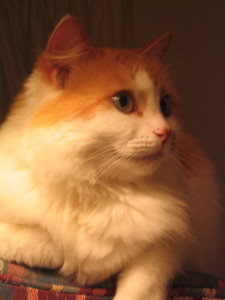 more of my parents’ home. It wasn’t long until everything became suited toward Suki, my parents’ unexpected third baby. Few cats are doted on to the extent that Suki has been, especially after my brother left for college. Suki was a constant companion for all of us, exceedingly soft (called by many “the softest cat in the world”, okay, called by my best friend), exceedingly sweet (will sit on your lap for several movies in a row if you let her), and exceedingly patient. I wasn’t sure Suki had a bigger fan on earth than my mother, until my nephew blasted into the world. It took a few years to figure out if he was intent on destroying Suki or loving her (so many ear pokes, admitting once that he wanted to “slice her” only to then beg through tears for forgiveness), but by kindergarten, there was no question. Suki was the love of his life. He in complete seriousness told me on several occasions that he wanted to marry her—the ultimate declaration of love from a seven year old.

Suki was a lover of many things in her life. Despite the terror my nephew inflicted on her in her earlier years, I do believe he was one of them. She loved nothing more than to scratch her chin along his Legos and Playmobil, or to curl up at the end of his bed while she slept. “The little guy,” my mom called him to Suki, in preparation for his visits. “The little guy is coming again, Suke.” She loved ribbon and string and plants, so much so that none could be kept in the house. She loved to watch all of the goings-on in the backyard—the birds, the deer, the squirrels and chipmunks—from her spot in the porch. Though not a cat you had to take the food away from (quite the opposite, I think she had feline bulimia), she always loved a good treat. A few licks of milk from your cereal bowl, whipped cream from off your finger, even a stray piece of Chex. She loved to greet you by the door with a little trill, and to sit in the window. She wanted to be near people always. Even when she was starting to not feel well around the holidays, she waded through the crowd on Christmas Eve, sneaking pets from everyone.

But I think what I am going to miss about her most are the things that mark her as different from my cat. (Because she is. She is nothing at all like my Lilly, though she is every reason I have a cat at all.) The way she would squeeze into my bedroom at my parents’ house and walk all over me in the middle of the night, whether I wanted it or not. The way she would hop up on my lap on the recliner, rub her face all over my book, and then sit on me for so long I’d almost pee the chair I kept putting off getting up from because it was so nice having this sweet cat on my lap. It was so hard to believe, after all, that she was an animal and not my sister. (And not just because I called her my sister and told my nephew she was my sister and insisted that she was my sister, just my “cat sister.”) The only wild thing I’d ever seen her do was, once or twice a day, absolutely tear around my parent’s house after using her litter box. Even as a more senior cat, she still tore through the place with abandon, mrowling the whole way around the joint and then galloping up the stairs. But then just so quickly, she would turn back into her normal, more docile self, smelling of my mom’s hand lotion, and cheerfully chirping.

As my parents prepared for the last trip to the vet on Monday, I’m left reeling from yet another death in our family. Because that is what Suki was. My sister. I’m sorry, but I’m attached.