Before I went to Vermont College of Fine Arts for my MFA, I didn’t have a writing community. I had friends who were willing to read my drafts, some of whom wrote, others that wanted to be helpful, but they didn’t exactly constitute a community. Or did they? What is a community, exactly?

When I ask Google (I mean, consult my handy dictionary) for a definition of “community,” this is what I get:

com·mu·ni·ty
kəˈmyo͞onədē/
noun
1. a group of people living in the same place or having a particular characteristic in common.
2. a feeling of fellowship with others, as a result of sharing common attitudes, interests, and goals.

That definition captures what I was looking for and what I had created by the time I left graduated from VCFA. The writers I met in Vermont didn’t exactly come from the same place. If anything, they came from ALL OVER THE PLACE. My classmates came from Hawaii, Connecticut, Utah, Arizona, and beyond–they were scattered across the country. But they did have a few characteristics in common: they loved children’s books and they wrote children’s books. They didn’t ask if someday I was going to write a “real book.” (Though, like me, they were asked that question by others!) Like me, they regularly read more children’s books than adult book every year. They cared about the Newbery awards as much–or more than–the Oscars. They read The Horn Book.  They valued, deeply valued, the craft of writing for ages 0-18. Every bit as much as I did.

The sense of fellowship came naturally with this group, especially with my graduating class at VCFA. (VCFA is very class-centric. I graduated in January ’14 with the M.A.G.I.C. I.F.s. We’re also really into naming our classes; it’s one of our many traditions.) Those two years of graduate school bonded us as we further developed our interests. Whether we chose to focus on picture books or middle grade or young adult or poetry, we stayed close because we were all approaching these interests with the same level of intensity, the same seriousness of study.

Almost a year after graduation, I’ve found that the bonds only continue to grow. My graduating class from VCFA has vowed to orga 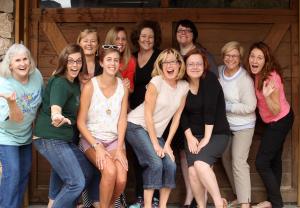 nize annual retreats, the first of which led me to Park City, Utah, this past September. For five days, we talked craft, discussed books and movies, cooked dinner for each other, entertained guest writers, and oh yes–that other thing we do–we wrote. It was in Park City, at our very own writing retreat, that I had major breakthroughs about a new project, a YA novel, that I was just beginning. I left invigorated, refreshed, but most of all, happy and exhausted in a way I hadn’t quite felt since middle school sleepovers. Now, that’s community.

Hundreds to thousands of miles don’t stop us from being a community. Not at all. While there are days when I realize I have spent way too much time on Facebook or texting or Twitter, I realize that I have an legitimate excuse. I’m staying in touch with my writer friends.

VCFA probably won’t be my only writing community–I’m always interested in meeting writers that live nearby, and I’m starting to connect with other members of the Sweet Sixteens. But it’ll always be the first place I found my people, where I felt at home.