Of the many things I have to do as part of creating an entirely fictional world, naming my characters is one of the trickiest parts. I don’t just mean the main character(s), but also all of the people in my main character’s world. Since I tend to write in first person, I’m in my character’s mind and body, and so I’m supposed to know the names of all the people she/he knows. This means I have to come up with a LOT of names!

I have a tendency to change names as I’m working through the story. (Thank goodness for the “find and replace” feature.) I wish I could say that all of my names are steeped in symbolism and significance, but the truth is, they aren’t. For me, it’s important that the names sound realistic for the time and place of the story, and also that they stand apart from each other– can’t have too many starting with the same letter.

As I’ve been working on my latest work-in-progress, a young adult novel set in a New England boarding school, I realized that my character (like I did in high school) knows nearly everyone in her school by name. What this meant was that all of those characters, even the ones that appear briefly, should have a name. So “that girl from my Chem class” had to become a real person. But how to come up with a ton of names without spending FOREVER creating and deciding on them? (Truth: I can easily spend an afternoon poring over name books and website of the top 100 first names for a particular birth year. It’s a super fun thing to get lost in and call “work,” but…. perhaps not the best use of time). 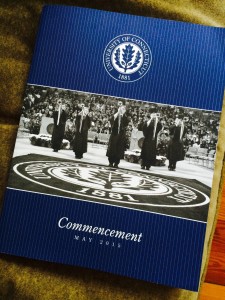 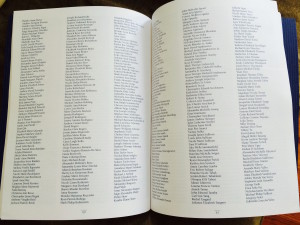 My nephew’s commencement book! (He graduated over the weekend from UConn.) Over 100 pages of first, middle, and last names to mix and match. Who knew this thing had a purpose beyond graduation day (as we sat in the stadium watching a thousand young adults receive their diplomas)?

Here’s to hoping the next time I have to name a random and very minor character, I don’t spend two hours doing it.