One of the really fun parts of getting closer and closer to publication has been connecting more with classrooms. This January and February, I’ve had the pleasure of Skyping with classes in Washington state, Ohio, and Texas. The first visit was with a class of 5th graders who had listened to The Distance To Home as a class read-aloud. Their teacher was a colleague of mine from the ALA Best Fiction Committee, and I’d mailed him an ARC of the book. I loved answering their questions about the inspiration behind the book, sports (we had to talk about baseball!), and Haley’s death. 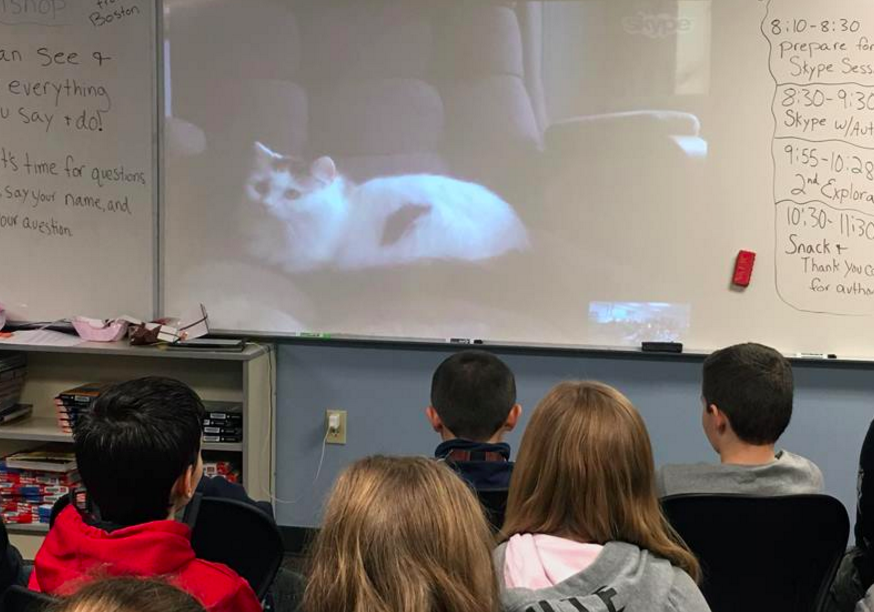 One thing that came up in both that chat and the chats I had with classrooms who hadn’t yet read my book, as part of World Read-aloud Day this week, was revision. (Oh, and my cat! If at all possible, she likes to work her way into these Skype visits.) But back to revision! Teachers and students alike really wanted to know how much revision goes into a published book.

(Were they ready for it?)

Of course, I told them about how there were more drafts of The Distance To Home than I could count. And that my first published book was actually the fourth full-length book I had written. And how a lot of re-writing isn’t fixing words and sentences (that fun comes later), but re-envisioning the whole story. I think it boggled their minds. I know it does for mine some days.

As I was watching Colby Sharp share his thoughts about TDTH, I was struck by how much he enjoyed the timeline — how the chapters alternate between “last summer” and “this summer.” Guess what? That aspect of the book: not really there so much in the first draft. Or the second. In fact, it was my agent, Katie Grimm, who suggested that instead of just a few chapters set in the past, I should actually have half of the book set in the past.

That was a pretty big revision. But, the more I thought about it, I could see how it would work. It took some re-tooling. And outlining. Imagining and drafting scenes that ended up on the cutting room floor a few months later. But eventually we got there.

The truth about revision is that you need to think outside of what you have on the page. Often there’s a way to enhance your story that you wouldn’t necessarily think of on your own. That’s where critique partners and agents and editors come in. At some point in the process, you lose yourself in the story. You can’t quite see what you’ve created. Can’t separate what you think you wrote (the story in your head) from what you actually set down on the page. Only someone else can do that.

There’s no magic number with revision. I wish I could say, oh yes, once you revise it 5 times, it will be done! But it doesn’t work like that. Not for me, not for any writer I know. You just keep at it, trust the process, and at some point, it starts to all make sense. The story coheres in a way it didn’t before, the disparate parts becoming a whole.

The things I told the kids in the classroom this week, well, I needed to hear them too. As I continue to revise what will be my second published book, 14 Hollow Road, I’m reminded that revision isn’t easy. It’s hard work. But it’s worthwhile in the end. I wouldn’t want that first version of The Distance To Home to go out into the world. But the version I revised and revised and revised some more? That one I’m proud of.